The Majat Code Book II: The Guild of Assassins

Book 2 of the Majat Code 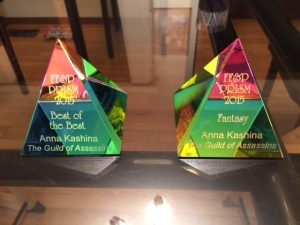 Kara has achieved something that no Majat has ever managed – freedom from the Guild!

But the Black Diamond assassin Mai has been called back to face his punishment for sparing her life. Determined to join his fight or share his punishment, Kara finds herself falling for Mai.

But is their relationship – and the force that makes their union all-powerful – a tool to defeat the overpowering forces of the Kaddim armies, or a distraction sure to cause the downfall of the Majat?

Oden Lan, Master of the Majat Guild, Assassin of the Diamond Rank, forced his face into a calm mask as he stared at the object in his hand – a four-pointed throwing star, the large diamond set into its center glittering so brightly that it hurt his eyes. The intricate lines of the golden inlay at the base of the blades spelled a word in the ancient runic language, used in the Majat Fortress as a token of the Guild’s unique ancestry.

In the Majat dialect the word was pronounced “Kar” and sounded similar to the star bearer’s name.

Oden Lan’s face twitched. It had been hundreds of years since the Majat Guildmaster had to arrange an assassination of one of his own, an elite warrior of the Diamond rank. The fact that he had to do it because Kara had betrayed her duty for the love of the sleek, blue-eyed Prince Kythar of the ruling House Dorn, made things worse. The Majat Warriors were not permitted to love. If they had been, Oden Lan himself would have never watched Kara grow up from a little girl into the most incredible nineteen year-old their Guild had ever seen, without letting her know how he felt about her. And now, he would never have the chance. She was dead, killed at Oden Lan’s orders by another of the Guild’s best.

A rustle of footsteps brought Oden Lan back to reality. He closed his fingers over the token in his hand, suddenly aware of the early morning chill creeping under his cloak, and the smother of the looming walls that made the courtyard adjoining the Guildmaster’s tower seem dark and hollow, like a deep stone well.

“This had better be important,” Oden Lan said into the gloom of the low archway.

A hooded figure separated itself from the shadows, its long, dark robe shuffling over the paving stones.

“Forgive the interruption, Aghat,” the newcomer said in a deep, soft voice.

Oden Lan looked at him with curiosity. The way the stranger used the Guildmaster’s rank as a form of address suggested familiarity with Majat customs, yet Oden Lan was certain he had never seen this man before. Finding an outsider, unannounced, in the Guildmaster’s inner sanctum, was so preposterous that Oden Lan couldn’t even find it in his heart to feel angry. After all, no one in his right mind would come to the Majat Guildmaster, the man in command of the most impressive military force in the history of the known world, with bad intentions.

“A friend.” The man stopped halfway across the courtyard and pushed back his hood, allowing the Guildmaster a good look at his face.

He had heavy, gaunt features, his prominent eyebrows looming over deep eye sockets. His graceful posture spoke of warrior training, not sufficient, perhaps, to stand up to a Majat of a gem rank, but good enough to defend himself in a tight spot. His bulging robe suggested hidden weapons, perhaps a sword or saber strapped across the back. But the most unusual thing about him was his eyes – so pale brown that they bordered on yellow. From the shadows of his eye sockets they stared at the Majat Guildmaster calmly, without the fear or reverence that Oden Lan was used to seeing in the faces of his visitors.

“What do you want?” the Guildmaster demanded.

The man shifted from foot to foot, his calm look acquiring a touch of curiosity, as if he was studying a strange animal.

“I bring news of one of your Guild members,” he said. “A Diamond, Kara.”

Oden Lan’s hand holding the throwing star clenched so tightly that the blades cut into his hand, piercing the skin. He kept his face steady, shoving the bleeding hand into his pocket before the strange, yellow-eyed man could see it.

“I believe,” he said, “that I have all the news of Kara that I need. If you have nothing else to say–”

In the silence that followed these words the quiet rustle of the morning breeze seemed as loud as the howl of a hurricane.

3 Responses to The Majat Code Book II: The Guild of Assassins