Highlights of my 2014 writing life

2014 has been a roller, coaster with so many ups and downs that now that it’s over I cannot help feeling exhausted.

Here are some of the good moments in the year:

First and foremost, the launch of my “Majat Code” series by Angry Robot Books. Yay!

Despite the many setbacks, including, the initial release of the “Blades of the Old Empire” with a missing key chapter, followed by my editor, Lee Harris, leaving Angry Robot and accepting a job at Tor.com, and finally by the sale of Angry Robot itself to a brand new owner, this has been a thrilling and happy event. And, despite the setbacks, the books have been selling well, and “The Guild of Assassins” had to be reprinted three weeks after publication. Thanks to all my readers and fans!

Another one of my 2014 highlights I couldn’t help feeling excited about (and should have blogged about a long time ago, actually) is summarized in these photos: 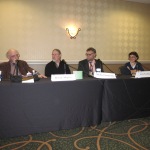 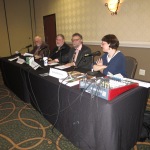 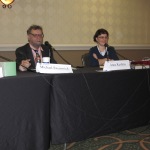 Me. Next to Michael Swanwick. Sharing a panel with Michael, Tom Purdom, and Bernie Mozjes at 2014 Philcon. Yes, sitting next to my favorite author on stage.

The panel revolved around the question of whether science fiction writing could be literary (the consensus, reached by the panelists in the first minute of the hour: Yes, it can. Panel over). After which Bernie and I had a chance to sit back, relax, and listen to Tom’s and Michael’s thoughts.

This was lots of fun. And, I have to say, these are the moments I love the most in attending writers’ conventions — meeting new and established authors face to face and having a chance to chat with them informally about books, writing, and anything at all.

By the Chinese calendar, 2014 has been the year of the Horse. My year. I am told that these are always difficult, if one believes such things. So, I am hoping for an even better 2015. Definitely, one of my New Year resolutions is to do more blogging.

5 Responses to Highlights of my 2014 writing life