Weapons in the “Blades of the Old Empire”

“Blades of the Old Empire” is an action novel, with a lot of the story centered around martial arts. It features several unusual weapons, some of them with prototypes in real life, but all of them exotic and fairly unique in a fantasy setting.

Here is a guide to a few of them: 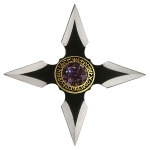 A Majat token, which symbolizes their contract and is given to their employer at the time of hiring, to be returned after the assignment is complete. This is a palm-sized throwing star set with a gem that matched the rank of its bearer (e.g., diamond for a Diamond-ranked warrior, etc.). The patters around the gem are inlaid in gold and spell the name of its bearer in the runic language unique to the Majat fortress. Each token is crafted for the warrior at the time of the ranking, and no two tokens are alike. A special variety of the Diamond token is the Black Diamond, which is issued as a death warrant (see the novel for further details).

An orben, a spiked metal ball on a strong, thin chain (not to be confused with mace or flail). This weapon has a prototype in Asian martial arts (e.g., as featured in Kill Bill). It is hard to master but difficult to defend against, since it can move unpredictably and the bearer can also let out the chain to a significant length, greatly increasing the reach. It is also easy to conceal, since the ball is fairly small and the chain thin enough to wrap around the body. At a close range an orben can crush bones, but used from a distance its force can be controlled to produce softer blows that can knock a person unconscious without doing permanent damage (and yes, thick hair can further soften this ranged blow). The orbens were banned after the Holy Wars exactly for this reason. Of course this does not stop the bad guys from using them and training an army proficient with this weapon.

A hagdala. This weapon is actually more common in martial arts: a short wooden staff that also serves as a sheath for two swords, drawn from each end. This weapon is very versatile: one can use it as a staff, or fight with one or two swords as the circumstances demand. “Hagdala” is the word from the Majat dialect, I am not quite sure what these are called in real life.

A double-bladed staff. A fighting staff with a hidden spring that can release two retractable blades springing out from its ends. This is a very exotic, advanced weapon that probably never existed in real life because of the difficulty of designing and maintaining such a mechanism. The Majat weapon masters keep it a secret. Fighting with this staff requires a special skill, but defending against it is very difficult because even if you know the blade can spring out, the eye can only follow the visible part of the weapon.

A shektal. It looks exactly like a whip, except that its leather part is replaced with a long chain of double-edged overlapping steel links. It is sharp all the way along the length and also has a very sharp tip, so it can be deadly in many ways. This weapon is easy to conceal by wrapping it around the waist. It is also easy to carry in the open, coiled at the belt.

Except the orbens, each of these weapons is unique to one of the characters in the book. I hope you enjoy learning more about them.

Pre-ordering is now open and the book will be coming out in 5 days! Yay!